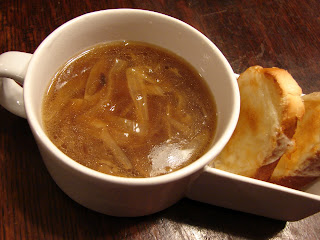 Lately I've mentioned our co-op classes that our homeschool group hosts--they are so much fun!  One of the classes this quarter has been a cooking class.  They've been learning and cooking all sorts of things in there.  A couple of weeks ago they were discussing how onions change when they are cooked and they whipped up a batch of French onion soup to help teach that lesson.  I know!  Yum, right?!  I got to sneak a bowl after classes were over:)

When Vince and I were first dating--and even in our early years of marriage--we often ate at TGIFriday's where one of my favorite things is their French onion soup.  I even found a recipe that tastes just like it and made it every so often for us, but since kiddos came along with their big aversion to onions it's been forever since I've made it.

Since that little cooking lesson though my daughter has proclaimed that she likes French onion soup!  Oh glory!!  Mr. B still isn't convinced, but he doesn't seem like such a hater anymore at least..ha  So when The Princess actually requested this soup last weekend, I didn't hesitate.  I grabbed my fave recipe and went to carmelizing--onions, that is!  It was heavenly and I positively stuffed myself.  So, for all you French onion soup lovers out there, here's a GREAT (and easy) recipe:

French Onion Soup
1/4 cup butter
1 tbsp. packed brown sugar
1 tsp Worcestershire sauce
2 large onions, cut into fourths and sliced
2 cans beef broth
2 soup cans water
1 baguette
6 slices Provolone cheese
*****
Preheat oven to 325F.  Melt butter in an ovenproof Dutch oven over medium heat (if you don't have one, just pour the melted butter into a casserole dish and use that for the oven part).  Stir in the brown sugar and Worcestershire sauce.  Toss onions in the butter mixture.
Bake onions uncovered about 2-1/2 hours, stirring every hour, until onions are deep golden brown.  Stir in broth and water.  Heat to boiling on stovetop.
Slice a baguette into 1/2" slices, butter them and toast them in the oven.
Next ladle up the soup into ovenproof bowls, place a piece of toast on top of the soup and cover it with a slice of Provolone cheese.  Place bowls on a cookie sheet and place in the oven under the broiler, just until the cheese is melty, bubbly and browned.  Watch it carefully!
Or you can just add cheese to the toast and serve it on the side (like I've done in these photos).  It was a bit easier for the kiddos to eat this way. 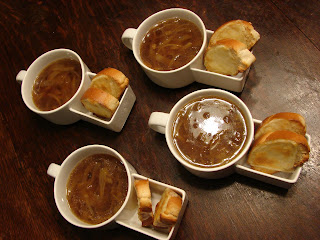