June 24, 2009
I optimistically named this *Part 1*, because I know there's more to come! Like I've mentioned before, the landscaping at our new home left a lot to be desired. Pretty much a couple of beds of weeds hiding some bushes in the front.
Vince got inspired though and decided how he could use some of the leftover lumber from the kiddos' new beds to create some lovely new landscaping. I'm very impressed!
Here is a shot of part of the front bed--the part he hasn't redone yet. You can see how neglected it is. Can you even see any of the *real* bushes in there? It's hard to! 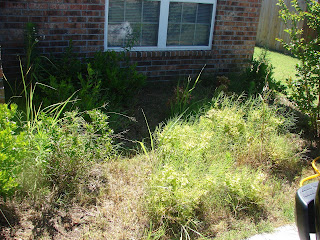 To begin the process he had to actually dig out the true plants and set them aside while he dug out the weeds. He took the bed down to just dirt. Then he added some topsoil (free, from my dad's yard!) and then put down that black fabric to keep future weeds out. 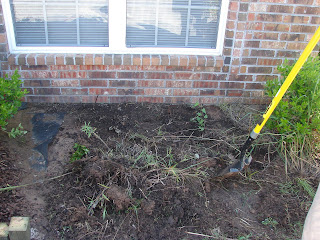 Then he took his leftover lumber and began cutting it into three different lengths. 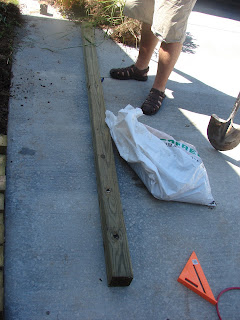 That created a very nice border (there wasn't one before) for the bed. Then he was able to put the plants back into the bed, adding mulch. Here's the first section he did: 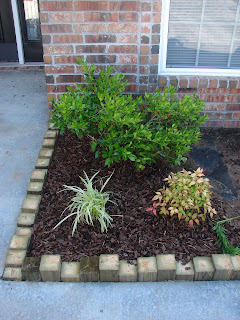 He continued on across the first half of the front bed and made it look so great! 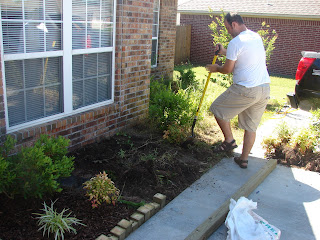 Here's the final result for the first phase of the front bed. Isn't it so nice?! I love it! It makes such a difference. 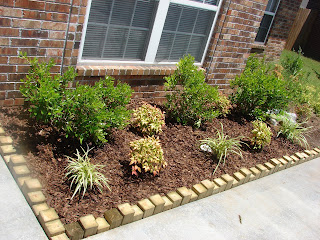 We've run out of the leftover lumber, but it got us off to a good start! Now as soon as this terrible heat wave is over, hopefully the rest of the front bed will get finished.

Heather and Reese said…
That turned out so nice! He did a fantastic job. How is your garden doing? Did you leave the plants in pots or plant them in the ground? Mine are doing fairly well. We've harvested a lot of peas and have several cucumbers. I have three watermelon plants but so far they are not budding :( So, I'm not sure what the outcome will be on them.

Lora @ my blessed life said…
Thanks for the nice comments on the landscaping!

Heather~
Our garden is doing okay. We did build a small raised bed and transplanted the plants into it. They seemed to do fine with that. We have harvested some tomatoes so far and the jalepenos are ready now, too! My bell pepper plants aren't doing so well though:(
June 24, 2009 at 12:31 PM

Heather and Reese said…
That's right Lora. I forgot that you posted about the raised bed. I promise, I do pay attention, I just forgot :(

Lora @ my blessed life said…
Don't worry about it, Heather! My brain is fried from this moving process, I can barely even remember posting about it:)
June 24, 2009 at 2:47 PM