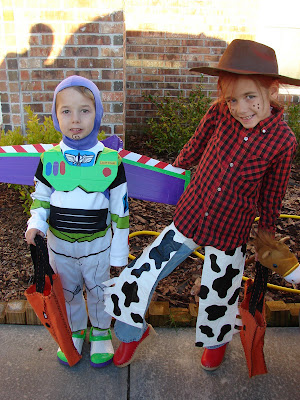 While we don't celebrate the *spooky* part of Halloween, we enjoy the *dressing up and getting candy* part:) My two little trick-or-treaters had so much fun, and so did I, walking around our neighborhood. 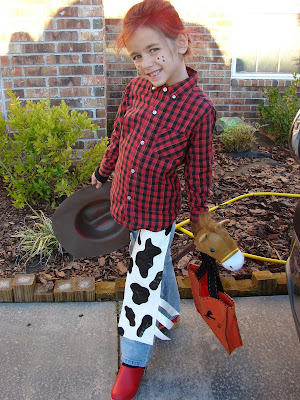 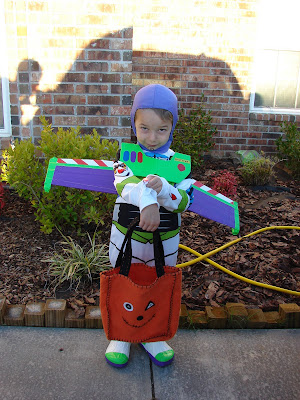 *Buzz Lightyear*, also of Toy Story 1 & 2 fame
As it turns out, we live in a great neighborhood for trick-or-treating, except for our particular street. Our house and one neighbor's house were the only ones with lights on. My mom came over to see the kiddos and then stay at our house to hand out candy--while we were out collecting more. Finally she called me on my cell phone and said, "I've given out all of your candy, all of your Twinkies, all of your fruit snacks and all of your apples! I can't find anything else to hand out!" I told her to turn the lights out:) LOL 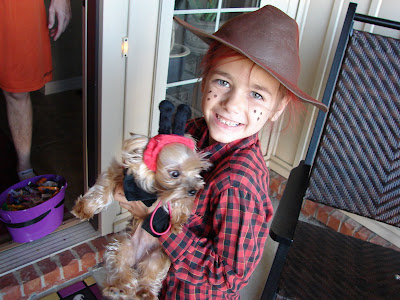 Here *Jessie* (aka, The Princess) is holding our neighbor's dog, whom she plays with all the time. The dog was dressed as a ladybug. So cute! 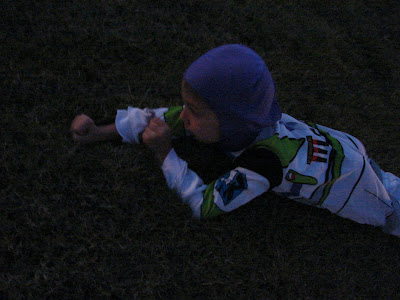 And even though this picture is a little dark (it was dark outside), I just had to share it. This is *Buzz* (aka, Mr. B) protecting us with his laser light beam. LOL He was SO into his character. Instead of saying "trick or treat" at the doors he would "laser them" (yes, Vince attached a real red light to his sleeve). Then he started running and sliding in yards on his stomach and lasering whoever was there (complete with all the sound effects, at which he is quite good). It was hilarious!

I love my kids! They are awesome!

AND so is my husband! Gotta give him props for being such a great dad. Last week before he left on his first trip, he got their costumes completely ready to go. He made *Jessie's* chaps with duct tape. Then after deciding it would be more feasable to buy this *Buzz* costume rather than making our own or buying the more expensive one with wings, he built some wings himself, using foam core board and, yes, more duct tape. He also picked up some Crocs at a thrift store and covered them in yet more duct tape to make some matching shoes. We might be a little ghetto in our costume methods, but they sure do turn out cute!

Maybe I should get him to do some guest posts on costume how-to's.....

Kayren said…
Cute! We had a Buzz Lightyear costume when Buddy was four, so that would have been nine years ago. We had it until Caboose couldn't fit in it anymore.

I think I'm going to do a separate post to answer your question about the Reformation Party. I decided the answer would be too long otherwise! :)
November 2, 2009 at 2:00 PM