June 13, 2012
I was wondering what was eating my roses (obviously I'm a novice!) when a friend pointed out all of the Japanese beetles in my yard.  Yikes!  But then she told me how to get rid of them.  So we headed straight to Lowe's to get some traps.

I haven't weighed how many beetles we've bagged and tossed, but it was disgusting no matter how much it was.  Although by the look on my son's face he was pretty excited to hold a bag full of bugs:) 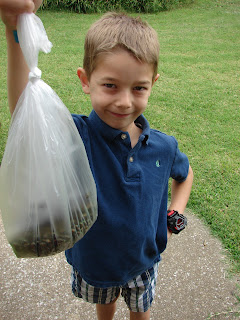 My daughter, not so much. 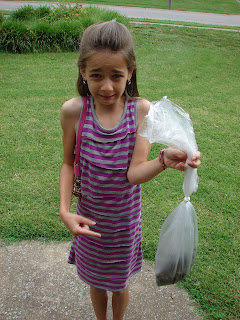 Come to find out, those pesky beetles were eating on several things in our front yard.  However, their number has been greatly reduced already and we've only had that bag up since Saturday.  Pretty impressive! If you have ever battled Japanese beetles, what worked for you?