The Weekly Wrap-Up: Crickets, a Caterpillar and Co-op

August 24, 2012
Here we are wrapping up another full week!  It's been a very productive one, too.  We have been working on several projects around our house.  Vince has been working on a deck expansion all summer and has finally finished it (I'll be blogging that soon!).  He's also had a major landscaping project in our backyard and that is just about to shape up.  We also tackled the garage this week.  I haven't been able to park in there for about 6 or more months now, but things are looking better.  The garage still has a long way to go though.  That will be yet another upcoming blog.  I love to blog about completed projects!

Inside the house I tackled some way-overdue filing (about 8 months overdue!) and made good headway with that.  (I really hate paperwork and filing!).  There was also some organizing and cleaning that happened--that's always good, right?

I even started on my lesson plans (finally!).

In the meantime, Mr. B captured a couple of crickets and created a little habitat for them in the house for a day or so. 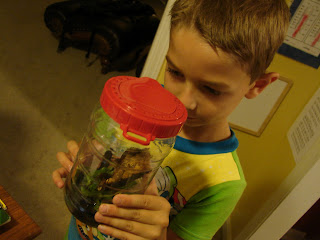 Vince found a ginormous caterpillar on the disc golf course and brought it home to the kids.  They immediately created yet another insect habitat for it (you wouldn't believe how much a caterpillar can poop!). 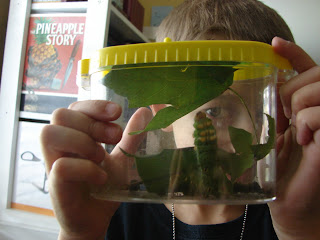 We released all of the bugs back into nature this morning--after a scare that they had died overnight.  I was happy to release live bugs rather than have a bug funeral.

Speaking of funerals though, we did have one for "dead" words in our Creative Writing class at co-op.  My friend Alicia teaches it and she has some great ideas!  We took words such as "happy", "fun", "like", and "love" and found replacement words for them that were much more descriptive--then we "buried" the "dead" words (in boxes of sand).  The kids loved it!  And it led into a exhilarating writing exercise (how do you like that word for descriptive language? :) 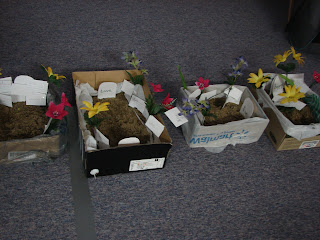 The kids had a wonderful time showing their "grief" over the "dead" words;) 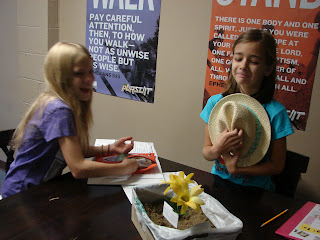 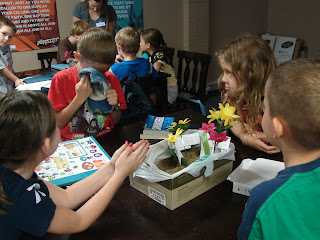 In other co-op news, there was much exercising in Muscle & Fitness, lessons on the Parable of the Sower in the Bible class, and continued learning about the Constitution and making their lapbooks in the US Constitution class.

After that we headed to the park with our lunches for some playtime with the rest of the group.  Now I'm ready for a nap!  Not gonna happen though ...it's time to get ready for an awesome weekend with my family!

I hope you have a great weekend, too!  Enjoy it and make the most of it!

This post is linked to the Weekly Wrap-up at Weird Unsocialized Homeschoolers.