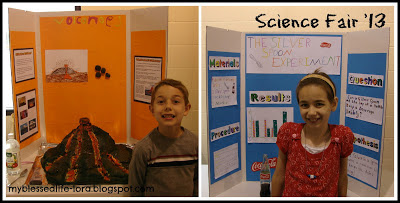 This past week we participated in our second-ever science fair.  It was a lot of fun!  And I could really see growth in the kiddos in their understanding of how to do their projects since the last time we participated in a science fair.  This is partly due to time and largely due to the great co-op class they participated in this past quarter.  In that class the teacher-mom spent six weeks teaching them about the scientific method and helping each class do a group project using that method.  It was a lot of fun and I even learned a lot. 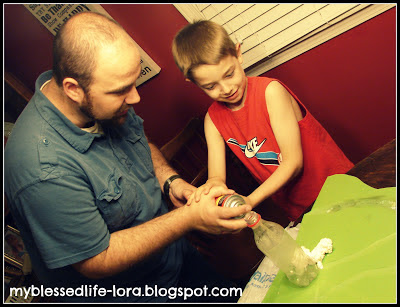 Mr. B really wanted to make a volcano erupt for his project.  Now this project didn't really follow the scientific method, but his age group (1st & 2nd grades) was allowed to simply enter an exhibition project if they wanted to since they were the youngest participants.

He and Vince worked together to make a volcano out of spray foam (after the try with homemade play dough failed--too heavy).  My husband loves to create out of foam and apparently my son does now, too.  He had a blast!

For his board he drew a picture of a volcano using a book sketch as an example and then he dictated information about volcanoes for us to print out on the computer for him (since lots of handwriting is not his thing ...yet).  He also included some pictures of Mount St. Helen's and some volcanic rock that I had picked up a few years ago on the beach in Hana on Maui, Hawaii.  We did a test run of the "lava" at home in a cup, then he did his experiment inside of this volcano at the science fair.  He was pretty excited about it!  And it went well. The Princess' age group (and up) was required to use the scientific method for their projects and she was very happy to comply.  She chose an experiment from one of the Mythbusters' Science Fair books that we have (that's where Mr. B found his volcano project, too).  You can find both of the books on Amazon, btw: Book 1 and Book 2.  They're really great! 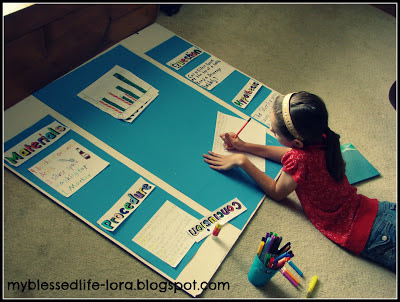 The Princess' project was called "The Silver Spoon Experiment".  Her hypothesis was that inserting a silver spoon into the top of a pop bottle would help it stay bubbly if left like that overnight.  She tested three other bottles left in various stages overnight as well: one with no cap, one with the cap, and then a freshly opened bottle.  She blind taste-tested them, recorded her results, and created a graph with her data.  I was pretty impressed with how well she did and how much she had learned in her co-op class.

I thought she did a great job on her board showing all of the scientific method steps: question, hypothesis, materials, procedure, results and conclusion.  She worked very hard on it! 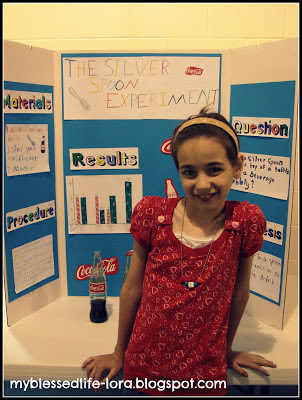 I was very proud of both of them for their ideas and hard work!  And they really had fun doing their projects, too.  I hope that next year our group will host another one so that they can continue to improve on their presentations and methods.

Do your children enjoy fairs such as this?  Does your homeschool group host science (or other) fairs?  I'd love to hear more about them!