Why I'm Glad My Husband Watches the Food Network 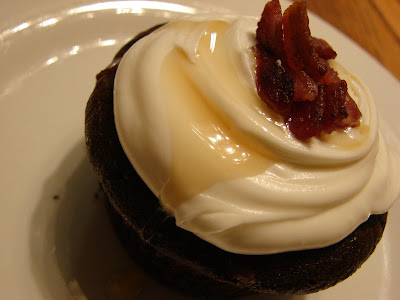 Occasionally Vince gets inspired in the kitchen. Even though he doesn't do the majority of the cooking, he's certainly not incapable of it. He's actually quite good! I enjoy it when he works in the kitchen with me.

He has his own *special sandwich*, has made pickles and decorates cupcakes with more patience than I do.

Sometimes he even watches the Food Network and makes me a special meal or two.

Two of his fave shows to watch on the Food Network are *Cupcake Wars* and *Unwrapped*. Apparently there were a couple of episodes lately that brought about this wonderfully inspired cupcake that he made for me last night. And supposedly it's just a prelude to what he's making for Valentine's Day....I can hardly wait!! 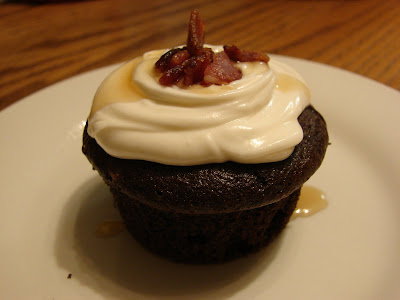 1 box of chocolate cake mix
(can be double chocolate, devil's food, etc.)
*****
Make cake mix according to box instructions, but add one extra egg to the batter. Set batter aside.
*****
Cook 8 strips of bacon, crispy but not burned, trimming off any "chewy" parts. Drain well and set aside.
*****
Take a package of Dove dark chocolates and cut about 12 of them into fourths. Set aside.
*****
Prepare your cupcake pan and begin to fill the cups 2/3 full with the cake batter. Next drop 2 pieces of the chopped Dove dark chocolate into the cups of batter. Finally drop about 2 oz. of cooked, crumbled bacon bits into the cups of batter. Bake as directed on box.
*****
When cupcakes have cooled frost them with this frosting:
1 can of vanilla frosting
Maple syrup
remaining crumbled bacon
*****
Mix just a bit of maple syrup into the frosting. Frost cupcakes. When you are ready to serve them drizzle just a bit more maple syrup over the frosted cupcake and put just a few bacon bits on top for a crowning touch. 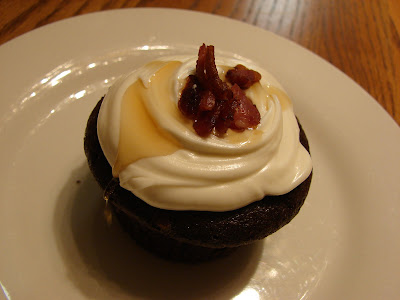 It's official: I love anything with bacon!!