Just To Make You Feel Better About Your House..

May 22, 2009
I thought I'd share this lovely photo of my living/dining room~well, at least it's mine for 9 more days. 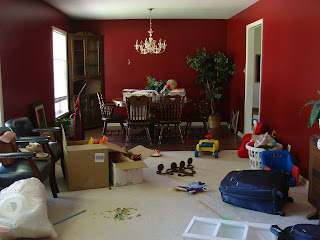 Isn't that the *picture* of organization? heehee You'll be relieved to know that this photo does not reflect on the true organization of this moving process:) I actually have a lovely list all typed up on the computer and each box has a designated number.

It has been an incredibly busy week. Which is why I've fallen off the face of blogland for several days. Apparently I'm not one of those people who can simultaneously pack, do laundry, take care of kiddos, try to maintain some semblance of order in the dismantled home and blog all at the same time. {sigh}

Thankfully my sister has been here all week helping me pack. She's an angel! So glad to have her here. We've had some fun, too. We've collapsed a few times from too much packing and watched some great *girl* movies: Persuasion and The Women (the original version). Plus tonight she, Vince and myself all went to see Angels & Demons. Very good movie! It was a much-needed break.

My sweet husband has been driving the wheels off of a rental truck this week, too. Since he's self-employed right now and has a flexible schedule we decided that we wouldn't try to move everything all at once. So we started the moving process this week in shifts. We loaded a truck on Tuesday morning and he drove to AR, unloaded and spent the night then drove back to AL on Wednesday. Thursday morning we loaded him up again (this time with the kiddos who are spending the weekend with Nana). He drove to AR, unloaded, spent the night and then drove back to AL today (Friday). He's leaving Saturday with one more load, spending the night and then driving back to AL with the kiddos on Sunday. Whew...got all that?! I'm not sure I do! He figured up that he'll have spent about 48 hours total driving this week. Bless his heart. I don't know how he's doing it!

Plus on the nights that he's been in AR, he's been building new beds for the kiddos. Yes, building beds! Since their rooms are relatively small we decided that it would be better for them to have loft-style beds to give them more play room. Mr. B's is a lower loft, with sort of a treehouse feel. The Princess' is like a bed resting on top of her very own playhouse. So far I've only seen a few (and I do mean few) pics, so I'm very excited to see them myself. I'll have to tell you all about it! Much fodder for the blog:)

So, as you can tell, there's much activity going on around here. After this weekend we'll just have one small load to take after our house closing on June 1st.

Next week we are taking the kiddos for one last quick trip to the beach~before we move twice as far away from it! I love the beach/ocean and the kiddos seem to take after me in that way. Not that Vince doesn't love it, just not as much as I do:) So I'm excited about relaxing on the beach and recharging my personal batteries, so to speak. Then I'll be all ready to tackle those boxes when we get to AR!

So I'll be around, even if it may not be as often for these next couple of weeks. Don't forget about me!! Oh~and THANK YOU all so much for voting for Vince's video this week!! Feel free to keep voting each day. The results should be announced June 6th.

Have an awesome weekend, my blog friends!

Kayren said…
Lora, you remember my moving nightmare, right? Your house looks like the picture of organization compared to mine!!! If you ever need to make yourself feel better, you can always go back and look at those nightmarish pics. :)

I didn't really blog during that time either. I just don't think it's possible to do that and keep your sanity. Hubby would not have been happy with me if I'd been blogging instead of packing either, especially since at the end we slept four out of 72 hours. Then we got on the road and drove. It was insane. That's really a novel way you are doing it...a little at a time. We were moving so far it wasn't an option, but that really works for you.

I've seen pics of loft beds and even printed out plans a long time ago thinking we would build them for some of the kids, but then we never wanted to build them if we were going to have to dismantle them and move. Once we got here, the were all bigger and it just didn't make much sense anymore, but I think the loft beds are really a neat idea.

So did you buy in Arkansas already or are you renting temporarily or what? And are you where your mom and dad are? I just didn't realize you already had a house there.

Lora @ my blessed life said…
Kayren~
I guess I've been so crazy busy that I forgot to mention that we found a house to lease just 2 days after we got the contract on our house in AL. It's a very good fit for us right now and we are really happy about it! I'll blog about that soon:)
May 23, 2009 at 1:47 PM

Michelle M. said…
Wow you have been really busy! I can't believe all that driving around you guys have been doing. I hope the next few days go well for you! Can't wait to see photos.
May 23, 2009 at 6:14 PM

Betsy Brock said…
Oh my. I can't imagine. We moved into this house 21 years ago. You can imagine the accumulation...kids and stuff! tee-hee! How wonderful to be kid-less and have your sister there. Twice and fast with the work and so much more fun than alone! :)
May 23, 2009 at 8:32 PM

Sally Ferguson said…
Safe travels! One tip that helped our kids to adjust to a new home: make their rooms a top priority. Get out the toys, hang familiar pictures and help them settle in to their new environment first. That helps the adjustment for the whole family!
May 28, 2009 at 8:30 AM

mimi charmante said…
What a lovely blog! Your children are gorgeous and I love that you posted a "real" photo - I posted about being real today and I am happy to see that you are comfortable showing your occasional messy side too!
Have a great rest of your week~
June 3, 2009 at 10:12 PM