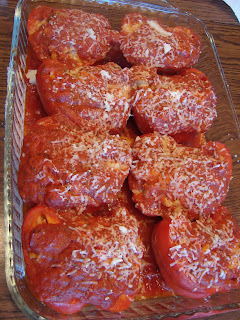 Last night we had a yummy new dish! I've only made stuffed peppers once before and only eaten them a few times. My mom didn't make these when I was growing up, but my mother-in-law made them for my husband and he loves them. So this past week when I got this new recipe from a friend, I thought it would be good to make for Father's Day weekend. And it was!!
Italian Sweet Stuffed Red Peppers
(from my friend Mikki)
6-8 red bell peppers
20 oz. mild Italian sausage
26 oz. jar Classico Italian Sausage spaghetti sauce with peppers & onions
14.5 oz. can diced tomatoes with basil, garlic & oregano
1 egg, beaten
1 pkg. Uncle Ben's ready-to-cook Whole Grain Medley/Vegetable Harvest
2 cups mozzarella cheese, shredded
*****
1. Remove casing from sausage; crumble and brown in skillet. Drain and set aside.
2. Wash peppers, remove stems and cut in half lengthwise.
Remove seeds from the insides and set aside.
3. Cook rice medley as directed.
4. In a large mixing bowl combine the sausage, rice medley, diced tomatoes, egg and cheese. Season with salt & pepper, if desired.
5. Spoon the rice/sausage mixture into each pepper half until full and rounded on top.
6. Place stuffed peppers in a 9x13 baking dish and pour the spaghetti sauce over the top.
7. Bake @ 350F for about 1 hour. Serves 6 adults. (I added freshly grated Parmesan on the top after it was finished baking, too).
**A few personal notes on this recipe:

Mikki said…
I am so glad you liked this. It just sort of evolved and that is why I used whatever cans, etc., I had. I think these will freeze well.

I love your blog.

Lora @ my blessed life said…
Thanks, Mikki! And, yes, that's exactly why I made those substitutions--those were things I already had. I was excited about finding those peppers @ Sam's though:) I googled how to freeze them and that's what everything said, so I think they'll turn out well. We'll find out in a few weeks anyway!:)
June 22, 2009 at 9:22 AM