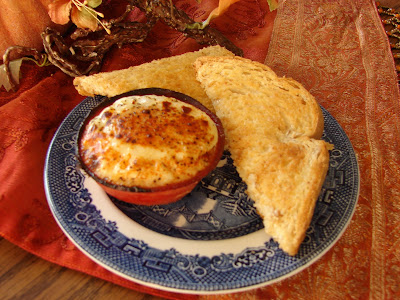 Yesterday morning I made something that I haven't made since I was a kid. I was reminded of this recipe last week when looking through one of my childhood cookbooks with The Princess: Betty Crocker's Cookbook for Boys & Girls. I've had it since 3rd grade~one look at the cover and you know immediately which decade I was born in. 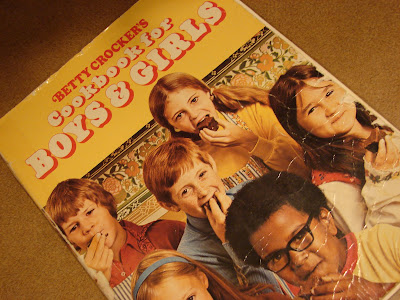 It has some pretty cute recipes in it. I can only remember making a few of them. One of those was Eggs in Bologna Cups. As I recalled, it was pretty yummy. So we thought we'd try it again. I never, never buy bologna, but this week I made a special purchase (all-beef!) just for this recipe:) And they turned out great~a big hit with everyone! I told Vince they made me think of Shirred Eggs, just a *poor man's* version..heehee 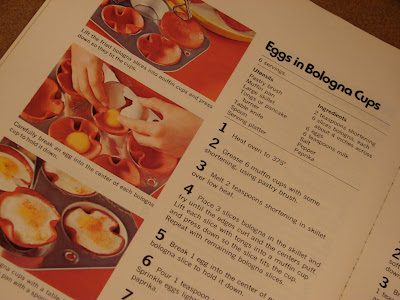 Eggs in Bologna Cups
(Betty Crocker's Cookbook for Boys & Girls)
1. Preheat oven to 375F
2. Take as many pieces of bologna as cups you
are making. Fry them in a skillet on both sides
just until the edges brown and they puff up.
3. Place them fried bologna into greased muffin tins,
pressing the bottoms down to make a cup.
4. Crack one whole egg (yolk unbroken) into
each bologna cup.
5. Drizzle about 1 teaspoon of milk over each egg.
6. Sprinkle salt, pepper and paprika on the top
each egg.
7. Bake for 15-20 minutes @ 375F or until the
egg is set.
8. Remove the bologna cups by loosening them
with a knife and lifting them with a spoon.

Anonymous said…
I love your blog and have given you The Versatile Blogger Award. Please visit my site to receive your award. Thank you for a having such an uplifting blog.
http://arborcreek3.blogspot.com
September 30, 2010 at 5:47 AM

Gwen T said…
I remember my mom making those for us when we were kids (which means our moms probably used the same Betty Crocker book??). My kids would love these - anything fun and different is a winner around here! :)
September 30, 2010 at 6:26 PM

Anonymous said…
I was searching the internet for bologna egg recipes and when I saw your site and the Betty Crocker's cookbook, the childhood feeling rushed in! I too have that same cookbook!!! (sharing my age as well).
Going to make the Eggs in Bologna Cups this morning for my 17yr old son.
(I used to make the PolkaDot Pizza and No-Crust Wide-Eyed Pizzas)
This made my day!
Thanks
December 4, 2011 at 6:57 AM

I hope you enjoyed the trip down memory lane:) I also made the two *pizza* recipes that you mentioned, seems like yesterday!
December 4, 2011 at 8:14 AM

Anonymous said…
My son loved them...so did I! I think I will treat him to the *pizzas* next!
I have a nice stack of children's cookbooks that I love to look through. I would get one every year from my Grandmother. I've started the tradition of giving my little nephew a cookbook for Christmas.
Looking forward to searching thru your other recipes.
happy munching!
~amy~
December 8, 2011 at 7:02 PM