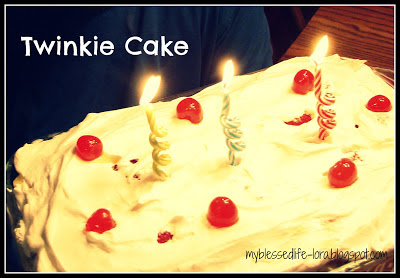 Is anyone else out there mourning the loss of Twinkies like my husband is?  We didn't buy them very often (me--not at all), but occasionally he would bring home a box of one of his favorite foods.

Since his birthday was coming up I suddenly remembered a cake I had made for him on the first birthday of his that we celebrated together: Twinkie Cake!  That was about 17 years ago!  I thought it might be time to bring it back, but then there was the question of Twinkies and where to get them.  Pinterest, of course!  And by that I mean a good copy cat recipe.  So I started the search and found a great recipe that I could tweak a little.

So to make a delicious Twinkie Cake, first make your "Twinkies".

1-1/4 cups water
1/3 cup canola oil
4 egg whites
1 large jar marshmallow creme
*****
Preheat your oven to 350F.  Next mix the cake mix, the water, and the oil in a large
mixing bowl with an electric mixer.  Beat well until the batter is smooth.

In a clean glass or metal mixing bowl, beat the egg whites until soft peaks form.
Slowly mix the egg whites into the cake batter, incorporating them completely.

When cupcakes are cool, use a knife to cut a circle into the top of cupcake.  Cut downward
toward the center in an inverted-cone shape.  Pop out this center and set aside.

With a spoon, simple fill the center of each cupcake with marshmallow creme.
Then take the little cone cake pieces you set aside, cut off the majority of the cake
and place the top back onto the cupcake, covering the marshmallow creme.

(Note: You'll need to make a double batch of these to have plenty to make a Twinkie cake!)

And that's it~you're done with your Twinkie cupcakes!
You can eat them just like that OR you can use them to make this delicious
Twinkie cake. 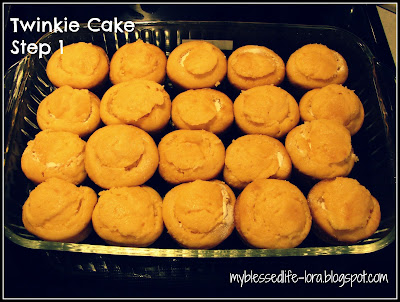 Step 1: Create a layer of Twinkies in the bottom of the dish. 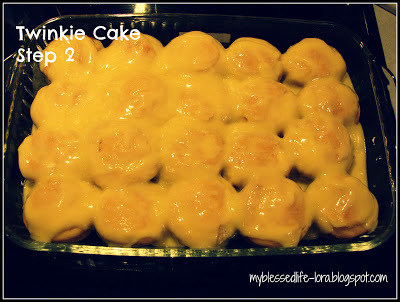 Step 2: Prepare the vanilla pudding according to the package and
spread it over the Twinkies. 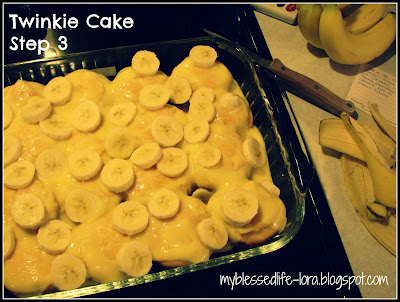 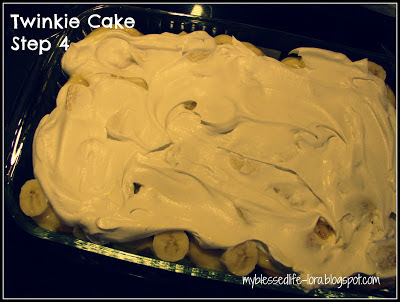 Step 4: Spread a 1/3 of the whipped topping over the bananas. 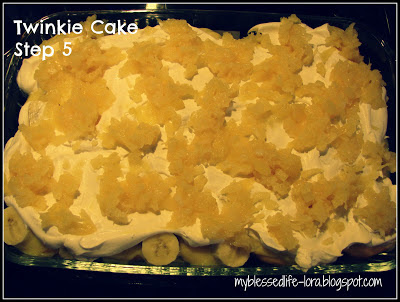 Step 5: Drain the crushed pineapple very well and spread over
the whipped topping. 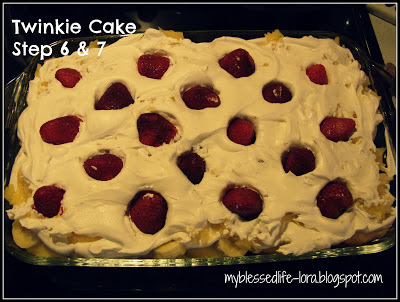 Step 6: Spread another 1/3 of the whipped topping over the pineapple.

Step 7: Spread your strawberries on next (I recommend slicing them
but mine were frozen solid and I had to put them on whole.  That's what
happens when you forget to take them out of the freezer in time).

Step 8: (pictured below)  Spread the remaining 1/3 of whipped topping
over the strawberries, toss on your cherries, and prepare to dig in! 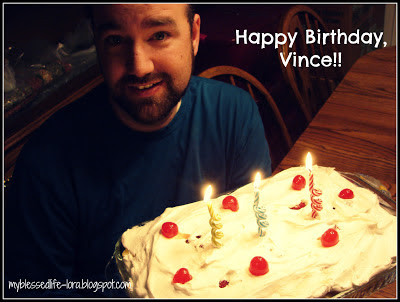 Happy Birthday to my awesome husband!!
Don't know what I'd do without him~
he is a true blessing from the Lord!!

Nancy@ThereIsGrace said…
Oh, my! That looks AMAZING!!! I think I gained 5 pounds just reading the recipe! Will have to remember that for my Hubby's b-day!
March 6, 2013 at 4:54 PM