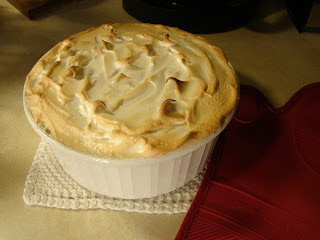 My mother has forever spoiled me where banana pudding is concerned. She always makes it homemade--that is, no box mix--and it is incredible! Growing up I thought that was the way everybody made banana pudding. I was grossly disappointed when I learned otherwise and consequently usually avoid all banana puddings except my mom's. Even though I'm a pretty experienced cook, I sometimes avoid those favorites of my mom's because I always think I won't make them quite as well. Today I decided to give this one a shot and it turned out SO GOOD!!! It takes a little more time than a box, I would imagine, but it's totally worth it. If you've never had banana pudding from scratch, you've got to try this!

Preheat oven to 400F. Combine sugar, flour and salt. Add milk gradually then add slightly beaten egg yolks and butter. Cook over low heat until thickened. Stir continually so it won't scorch. When thickened, remove from heat and add vanilla. In a 2-quart dish place a layer of vanilla wafers, then a layer of banana slices, then half of the pudding mixture. Repeat layers. Top with meringue. To make the meringue:

Kelli said…
Oh, this looks so yummy, Lora! I'm weird when it comes to bananas...I can't eat any of the artificial flavored stuff, so thank you for sharing your mom's special recipe!
~Kelli
May 13, 2008 at 10:44 PM