September 27, 2009
Last week was filled with good food, I must say. It was my birthday week and I got to celebrate all week long~just the way I like it:) Seriously.
On my birthday night my awesome hubby took me to P.F. Chang's. Wow. Have you eaten there?! I've been hearing about it forever and just discovered there was a new one only an hour from us, so I requested it for my birthday date night. I was a little worried that I had built it up so much in my mind that I might be disappointed...NO way! It was sooo yummy, I can't wait to go back!
The rest of the week was filled with good home cookin' and another night out, compliments of my parents, on the weekend to celebrate my birthday some more. We went to one of our all-time fave places, a local Italian restaurant, Taliano's. If you live in the Fort Smith, AR area at all you really have to eat there~the manicotti is amazing!
I promised you a couple of the recipes from my menu last week, so here they are, with my menu plans for this week following: 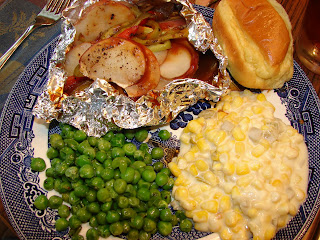 Chicken in a Package 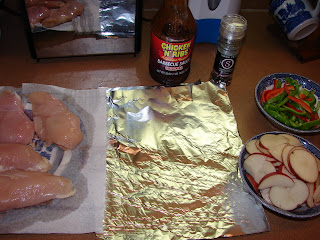 On each piece of foil spread a small amount of bbq sauce on half of it. Place the chicken breasts on top of the sauce, then cover each piece of chicken with slices of peppers and potatoes. Sprinkle with black pepper and top with more bbq sauce. 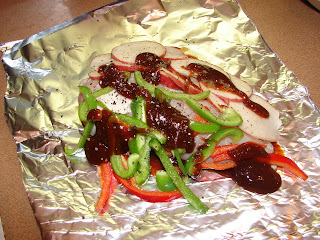 Wrap each chicken breast up with the other half of the foil piece and seal well. Bake @350 for 1 hour or until potatoes are tender. (Its a good idea to place a baking sheet on the shelf under the packets to catch any possible drips). 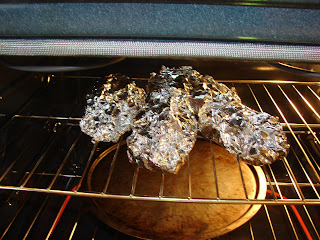 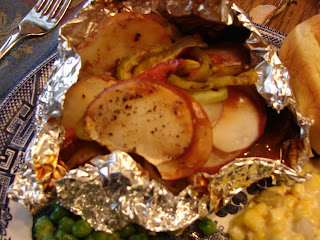 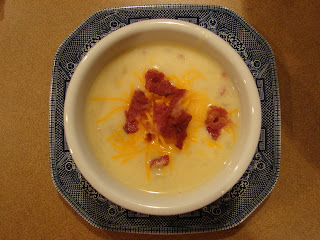 Mom's Potato Soup
Enough peeled, chopped potatoes to fill a soup pot 1/2 full
3 Tbls. butter
2 onions, chopped
2 stalks celery, chopped
1 can chicken broth
Salt & Pepper, to taste
1 quart half-n-half
1/2 lb. bacon, fried crisp
2-3 Tbls. cornstarch
*****
Melt the butter in a large skillet and saute the onion and celery. Put the peeled, diced potatoes in a large stockpot and cover slightly with water; cook until just tender. After the onions and celery are sauteed, add the chicken broth and simmer for 20 minutes. When potatoes are done, leave water in and partially mash them. After the broth mixture has simmered, add it to the potatoes and stir well. Add salt and pepper; cook about 8 minutes longer. Add the half-n-half and stir. The soup will be thin. Let this simmer on low for 15 minutes, stirring often. Then mix the cornstarch with a little water and pour into the soup, stirring well. Just when you are ready to serve the soup, crumble the bacon and sprinkle on top. I also like to add in shredded cheddar cheese. And this is also good to make with broccoli or cauliflower. 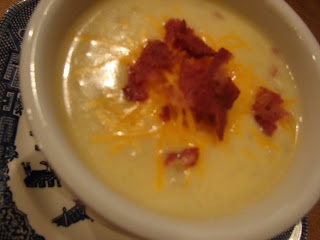 Kayren said…
The soup looks really good. I love potato bacon soup. It's going to be chilly and fall-like here this week. Bring me some?
September 27, 2009 at 10:22 PM

Lisa said…
It sounds like you had a great birthday week! In my book, good food makes everything better :)

Great recipes! Potato soup is one of our favorite fall meals. I'm definitely going to have to make the chicken in a packet. That looks easy and delicious! Oh, by the way, have you ever tried PW's potato packets? Those are great too! I'm a little addicted to them....I've made them several times in the past few weeks haha! Thanks for sharing!
September 28, 2009 at 10:43 AM

Unknown said…
Yes, I've been to PF Chang's when we were living in San Diego. It had terrific food and great service.
Happy Belated birthday wishes.
You have so many yummy recipes planned for this week's menu.
I love participating in MPM. I get such inspiration from visiting.
September 28, 2009 at 12:53 PM

Lora @ my blessed life said…
Lisa~
No, I haven't tried that particular PW recipe, but I'll have to check it out. I did make her bacon-wrapped stuffed jalapenos the other night though and they were delicious!
September 28, 2009 at 1:39 PM

January 05, 2010
Recently I tried out a new craft idea~and it was SO much fun!! And extremely frugal, too. That's always a bonus, right? So here we go: 1. Take your basic composition notebook (purchased at the back-to-school sales for .99 each). 2. Go to your craft supplies and get your Mod Podge ready, along with a good paintbrush. 3. Look through all those scrapbook papers you've been randomly collecting and choose some. 3. After choosing your paper for the cover of your book and trimming it to fit, start *painting* the cover with the glue. Next, give the back of your paper a good coat of glue, too. (I left the binding uncovered so that I could use a contrasting paper there later on). 4. Glue it on! Remember to smooth out any air bubbles under the paper. 5. Flip the cover open and make a few cuts on the corners so that they will fold over nice and neat, then add a little more glue to the edges of the inside cover and a little more to the paper edges. 6. Fold them over a
18 comments
Read more

February 17, 2011
We are learning all about the ancient world this year with Story of the World I and loving it! We've been learning a lot about Egypt, of course, which is completely fascinating. Most recently we have studied the New Kingdom of Egypt, which includes the story of King Tut. So we decided making an Egyptian death mask in the style of King Tut's would be a fun project. First since it was too cold at the time to paper mache in the garage (it probably would have frozen instead of dried-ha) and it was too messy to do it in the house, we decided to pick up a couple of cheap craft masks at Hobby Lobby. Next we cut out cardboard shapes to complete the shape of the death mask, attaching them with hot glue. Vince even put a little detail on the *beard* with the hot glue per The Princess' request. Then the kiddos started to paint them with this metallic gold tempera paint. It worked okay for the cardboard, but would not coat the plastic of the mask. We thought maybe a second c
23 comments
Read more