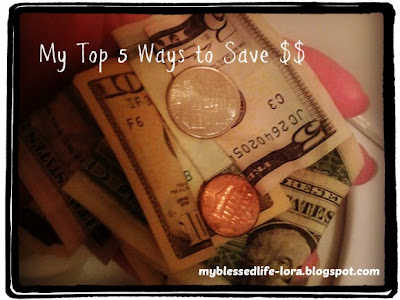 Three years ago this very week we had a major shift in our finances~we became self-employed. Accordingly, we made some major spending adjustments. Lately I've been reflecting on some of the things we've learned and how we've grown in ways to make a dollar stretch. It's been a great (while not always fun) learning experience. We definitely have a better understanding of the value of a dollar.


Some of the ways we have saved:


There are lots of other little ways that we save $$, but those are my top 5.

What are your top ways to save? I'd love to hear!

Connie Carr said…
My family and I, along with some friends and their kids, went to Arkansas to see the Duggars. (Michelle is an aunt to the friends that we went with) Now the Duggars know how to strech a dollar :) Their daughter, Ginger, made tacos one night and I noticed there was not a lot of meat for all the people there. But after the meat was cooked she added it to chili beans, some of which she had mashed. That made the meat go further plus it gave it a great flavor! I have done this myself and was impressed that I did not need that much meat. We also go to thrift stores. This saves a lot of $$$. The stores are great for boy's clothes because boys are so hard on clothes, we live on a farm, and it does not bother me as much to let them play in the dirt when the clothes don't cost that much.
June 28, 2011 at 10:51 AM

Lora @ my blessed life said…
@Connie:
Those are great ideas! I love to use my leftovers in creative ways, too. I usually have a *soup shelf* in my freezer where I've got bits of leftover veggies, etc. and I add them to soups or casseroles as needed. And we have been shopping used clothing for the kiddos since my oldest was born! We usually hit the big children's consignment sales 2x a year and stock up for each season.
June 28, 2011 at 11:28 AM

Mavis D. said…
I'd like to add two things:

We minimize on clothing. The boys have two "nice" pair of pants with about 5 "nice" shirts. The rest is for play and around the house. It really keeps the clutter down and the costs down. We do the same for the girls in the family but it's a little more challenging.

Another thing we do...since there are so many "boys" in our family, I learned to cut hair a long time ago. I have a hubby who was willing to endure a few bad haircuts until I got it right. The boys started out with "burr" haircuts until I learned to cut their hair. Figure 5 heads multiplied by $10 per cut SEVERAL times a year...that's a lot of money saved!
June 28, 2011 at 4:08 PM

Lori said…
Ok, so I am frugal at the store and already plan my menus, but I have never made my own laundry soap. I read your blog on it and I am afraid I will mess it up, but it's so cheap that I am sure a messed up batch or two will be all it will take for me to get it. I can't wait to try it! Now...where do you get the washing powder, borax and naptha soap? Off to find out! Thanks so much!

I found the washing powder, Borax and Fels Naptha all on the laundry aisle of our local grocery store. I think it's also available at hardware stores. I hope yours turns out well~it's really easy, so I'm sure you'll do fine!
June 29, 2011 at 9:20 PM