On Lake Erie and Lessons Learned at a Campground 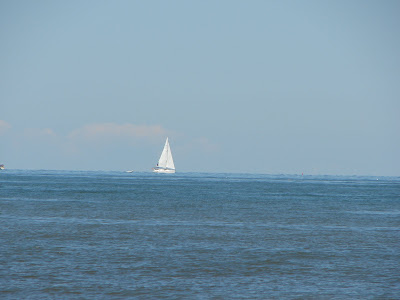 In the midst of all this moving process we planned a little family vacation for ourselves. It was good timing~even if it did leave lots of boxes waiting on us~we needed a getaway to relax!

The kids and I really wanted to go to the beach, but Vince wasn't up for it...it was too hot. Then I had this idea to head up to the Great Lakes area for a few days. They have beaches, right?! I grew up in Southern Ohio and had been up to the Lake Erie area a few times as a kid, but Vince and the kiddos had not. So we thought that would be a good place to head. 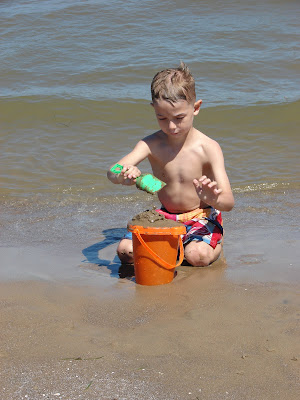 I'm glad we did, the weather was really perfect! We were only there for about 2 1/2 days, because we took our time along the way, stopping at antique stores or wherever we wanted.

We enjoyed one day at the Cedar Point beach and it was lovely! I had never actually visited any of the beaches along Lake Erie and was really impressed with the sand~it was just as soft and fine as any beach along the Gulf Coast. At least it was where we were. And the water was really nice, not frigid like I had feared:) The kids really enjoyed themselves, they are beach babies! They could play in the water, dig in the sand and chase seagulls all day long, day after day. 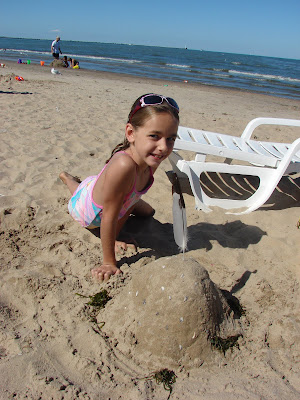 Our other day on Lake Erie we took a ferry out to Put-in-Bay island and spent the whole day just putting around, exploring and doing whatever again. Such fun and freedom! 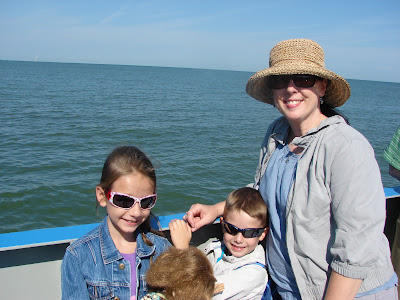 And when I say *putting* I really meant it. We rented a golf cart for the day and I'm pretty sure that was the kiddos' favorite part of the island...heehee There are cars there, but tourist mostly rent bicycles or golf carts. The tandem bicycles are fun (I did that with a friend on a school trip in 9th grade), but the kids weren't quite big enough for those yet. Not to mention that my legs are not what they were in 9th grade either...ahem. 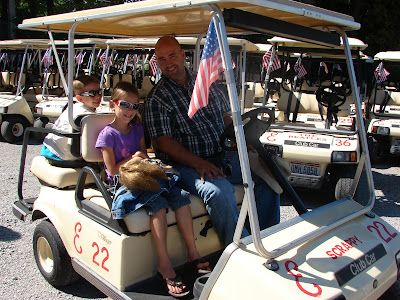 The little island is so pretty! It's very New England-ish, with beautiful houses, flowers and seafood. 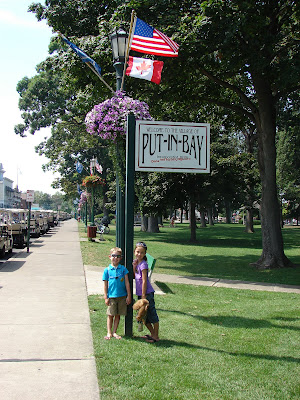 It was fun to see flowers blooming that have been out of season in the South for several months now. 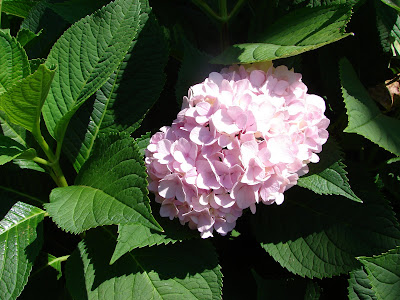 We just thoroughly enjoyed our day here. Asking strangers to take our picture... 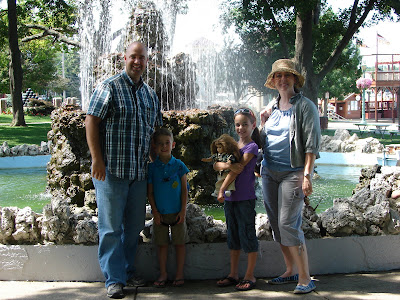 ...riding a vintage carousel (my kids have never seen a carousel they didn't love!)... 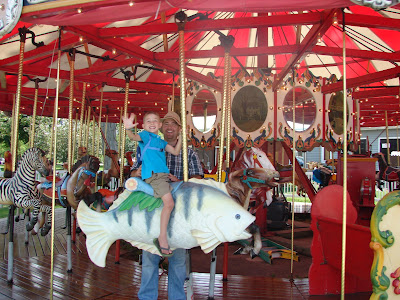 ...eating lobster sandwiches on the waterfront...just a beautiful day! 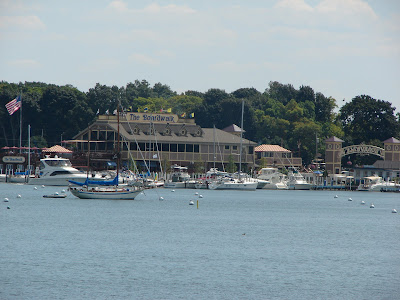 We also took the opportunity to visit the national historic military site of Perry's Victory and let the kiddos earn another Jr. Park Ranger badge. 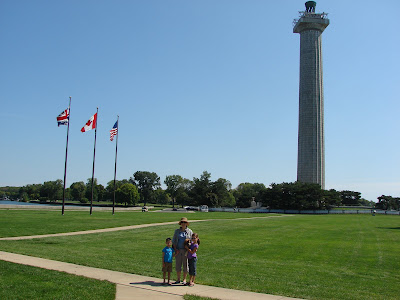 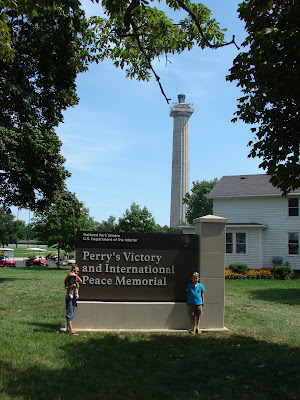 Now, I did say something in the title of this post about a campground, didn't I? Well...when we were planning our trip, we were trying to keep within a certain budget and be somewhat frugal. So while we were checking hotel rates in the Sandusky, OH area I thought I would check out some campgrounds, too. We really didn't want to bring the tent and all that goes with it on this trip, but when we saw this one place that rented cabins we were interested. The price was great, of course, but we should have done a bit more investigating...like used Google Earth maps or something:) 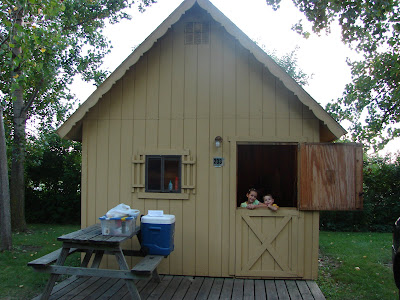 When we arrived and saw the cabin, it was cute on the outside...but on the inside it was pretty much like staying in a tool shed. Plus, see that little *hedge* right behind the cabin? Right on the other side of that (literally) was the exit ramp off the interstate. You can only imagine the noise. So. Loud. 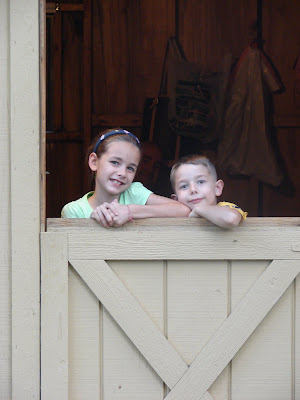 However, the kiddos thought it was great and immediately proceeded to play Little House on the Prairie. I told you it was *rustic*. The big charm for the kids was the set of bunk beds. They decided to take turns sleeping on the top one. 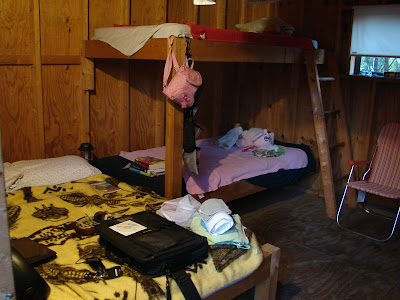 Well, as it turned out, during our two nights there Vince and I got almost no sleep whatsoever. It got pretty chilly at night and we needed more cover~that we didn't bring~and we both developed colds. The kids slept well only on the nights they were in the bottom bunk. The Princess froze on the top and Mr. B kept waking up with the fear of falling off. We had to laugh about it all, because we were so miserable at the cabin. I told Vince that I realized I only enjoyed camping when we were just doing that, not going sightseeing during the day, not trying to look presentable for the public, just being out in nature...camping. Trying to camp while on a vacation doing other things just wasn't working for us. Maybe if we had an RV... 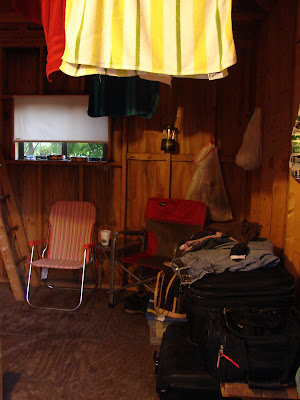 Finally, Vince had enough~the morning he woke up with the beginnings of his cold. We were actually scheduled to be there for three nights, but he was able to get a refund on the third night and splurged on one night at the Great Wolf Lodge. Yeah, the hotel with the indoor water park. We didn't mention it to the kids until we pulled up, but when they heard the words *water park* they were beyond excited! 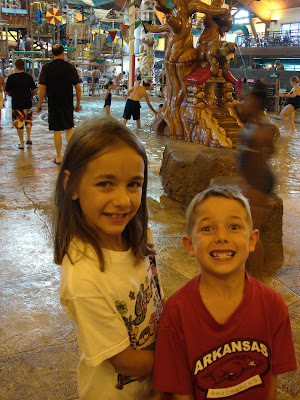 And it was totally worth it! The kids couldn't have had more fun that night at the water park...hey, even Vince and I had a blast! Plus we really enjoyed that king-sized bed in a cozy room. I was even tempted to turn on the fireplace just because it was there and I could. But I thought that might be pushing it:)

So our time in Northern Ohio was very memorable and fun! Then we were off to Chicago...

Kathy said…
what a fantastic trip --- minus the campground of course! I can totally see why you didn't get much sleep! I love seeing all the fun things you do together!
August 26, 2011 at 7:06 AM

February 17, 2011
We are learning all about the ancient world this year with Story of the World I and loving it! We've been learning a lot about Egypt, of course, which is completely fascinating. Most recently we have studied the New Kingdom of Egypt, which includes the story of King Tut. So we decided making an Egyptian death mask in the style of King Tut's would be a fun project. First since it was too cold at the time to paper mache in the garage (it probably would have frozen instead of dried-ha) and it was too messy to do it in the house, we decided to pick up a couple of cheap craft masks at Hobby Lobby. Next we cut out cardboard shapes to complete the shape of the death mask, attaching them with hot glue. Vince even put a little detail on the *beard* with the hot glue per The Princess' request. Then the kiddos started to paint them with this metallic gold tempera paint. It worked okay for the cardboard, but would not coat the plastic of the mask. We thought maybe a second c
30 comments
Read more