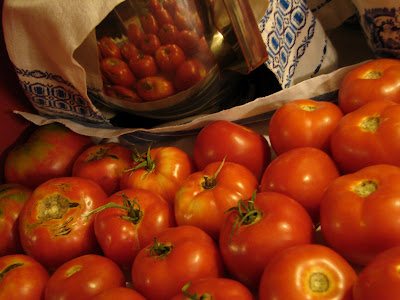 Not only have I had lots of banana peppers this summer, we're getting lots of beautiful tomatoes!  I didn't want them to go to waste, so here we go with the canning again :)  I'm really feeling pioneer-ish these days--ha!  Seriously though, I can't wait to use these this winter for chili, soups, casseroles and more!

Of course the first thing I did was to call my mom--because she has canning experience--and get some tips from her.  She was very helpful and gave me a much simpler game plan that all those canning websites I'd been reading.  You can really can tomatoes without all of that fancy equipment (as handy as I'm sure it is).  The only specialized canning "equipment" that I have is one of those plastic canning funnels.  Yep, that's it.  I simply use large stock pots for the rest of the process.

So, let's can some tomatoes...

1.  Get your jars ready.  (I used pint jars instead of quart simply because the size makes more sense for cooking purposes.  I probably wouldn't use a whole quart jar in a recipe and then I risk the chance of the leftovers spoiling in the fridge).  I simply crammed as many {clean} jars as possible with their lids into a large stock pot and boiled them, then kept them simmering until I was ready to use them.  After I used the first batch of jars, I simply repeated the process with the next batch.

2.  While your jars are sterilizing, get another pot of water boiling.  And get a large bowl of ice water handy nearby.

4.  After the tomatoes have cooled for a few seconds in the ice water you can pick them up one-by-one and take their skin off.  The blanching process with cause the skin to practically fall off--so easy!  Then cut out the core and drop them whole tomatoes into another large bowl.  They will be gorgeous whole tomatoes like this: 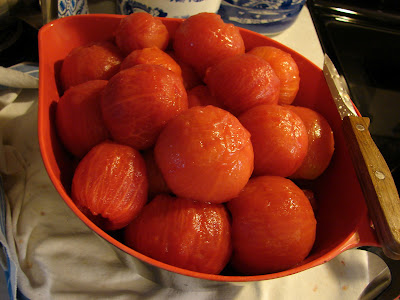 5.  When you are finished blanching all of your tomatoes, rinse out the large pot of boiling water because you are going to need it again (unless you have an unlimited supply of large pots in your kitchen:).

6. Begin to cut your tomatoes into pieces, as large or as small as you like (I cut most of my tomatoes into 1/6ths or 1/8ths.  I figure I can cut them down smaller for recipes if I need to) and put them into the fresh pot. 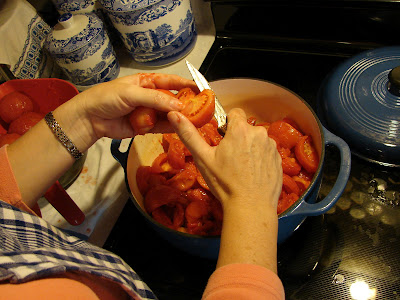 7.  When the pot is full begin to cook down the tomatoes a little on low heat, you want to just bring them to a simmer.  They will make their own juice as they cook.  When they're ready make sure to skim off any "foam" on the top that may rise from the simmer.  Now you're ready to put them in jars!  (This large pot made 9 pints, just in case you were wondering). 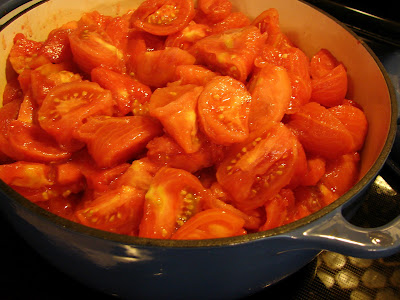 8.  Using your jar funnel fill up your jars, leaving just a little room at the top.  When you've finished filling them, add 1 Tbsp. of lemon juice and 1/2 tsp. of salt per jar.  Make sure the top of the jar is nice and clean before putting on the tops--you may need to wipe them with a damp paper towel.  Screw the tops on tightly and let the jars sit for about 24 hours.  You'll start to hear that lovely seal-popping sound pretty soon though (I love that sound!). 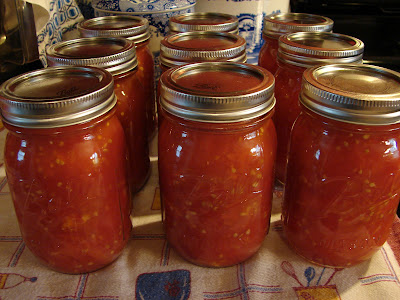 Unknown said…
Oh my goodness, Lora! What a beautiful job you have done. I can't believe you have that many to can already! My daughter Ashley planted 32 tomato plants and we have only had 2 yellow pears so far!
Hugs,
Mary
July 20, 2012 at 8:45 PM