What I've Learned During My Early-to-Rise Challenge

March 28, 2013
Well, here it is ...the last week of the Early to Rise challenge.  And I have learned a few things about myself.

First of all I have learned that being a night owl is deeply ingrained in me.  I absolutely love those late hours when the kiddos are {hopefully} asleep in bed--I do have a night owl daughter, too--and I can relax, watch a favorite show, work on lesson plans or another project, read a book, even make a late-night run to the store ...whatever I want to do.  Sort of like if I got up early before everyone.  And while in my mind I would really like to flip-flop this to get up earlier than everyone else, it never fails that I get this massive second burst of energy every night around 9 and the kiddos are all tucked in.  To go to bed early would literally require sleep-aid every.single.night. because even when I've gotten up extra early it doesn't make me any sleepier at night.

Secondly, I've learned not to condemn myself if I don't/can't get up as early as other people.  The pictures that people have been posting of their alarm clocks going off at 5am, 4am, even 3am have really made me feel guilty some days.  And like a big, fat loser-ha!  But as one blog friend commented, "find the schedule that works best FOR YOU.  ...don't beat yourself up."  I SO appreciated that!  It totally made my day!  And I am coming to terms with that.  Early mornings are not my best time.  Even on the mornings that I have been able to rise early I can't say that I'm really very productive because I spend all my time just trying to wake up.  And hoping no one else wakes up and expects me to talk to them...heehee

And, lastly, I've learned that I really do want to improve my waking-up-time.  Even though I love late nights and probably always will, I do want to rise earlier than I have been.  It mostly likely won't be at 5am, but that's okay.  I'll enjoy the early moments that I can get.  I have enjoyed the challenges presented (not that I've done them all) in the book Early To Rise by Andy Traub.  He presents some very good arguments for starting your day early and it's definitely worth the read.

So what about you?  Do you rise early?  Have you participated in this challenge?  What are your thoughts?  I'd love to hear them! 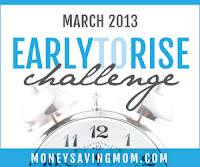 Nicole said…
Just get up 15 minutes earlier than you normally do and WHAM! ... you have just met an Early-to-Rise Challenge! (It's early to you, right??)

Great job in using the challenge to learn some things about yourself.

Me? I do like to get up early. But I wish I was someone who could stay up late. I start dying at about 6:30 p.m. every night. My husband is a night owl, so we don't match in this area and I wish we did.

Little Oak Table said…
I'm in the same boat with you sister, me and mornings never have mixed well and it's all good!

Learning to give myself grace that it is OK has been my biggest challenge.

Nancy@ThereIsGrace said…
THANK YOU!!! Even though I did not do the Early to Rise challenge, I have done several like it, and it's always the same...I muddle through and revert to my old, night-owl ways as soon as I'm done! I have become increasingly convinced that you are born with either night-owl or early-bird tendencies! I, too, get a burst of energy at 9:00. I do wish I could find a way to get up A LITTLE before my kiddos and be more prepared...still working on that! Good for you for sticking with it!
April 1, 2013 at 10:09 AM