February 01, 2010
Ahh...February 1st. That means two things: 1) the *eat from your pantry* challenge is officially over and 2) my husband is no longer wanting to eat only fruits and veggies. So that means that I have some flexibility in my menu planning once again. And I'm looking forward to making a run to the grocery store, even though a month of pantry meals didn't make as big of a dent as I thought it might. I still plan to try to eat out our pantry as much as possible for a while.

This past week I made an old, favorite recipe that I haven't made in a while (waiting on the kids to get less picky, you know). It's my Grandma's recipe for goulash. It's not the traditional kind of goulash, it's more like a baked spaghetti. I have no idea the origin of the recipe, but I imagine she created it. I know some people think that *goulash* is just another name for a dish that has a bunch of stuff dumped in it and I suspect that's how my Grandma named this dish. I could totally see her doing that;) It's super yummy and Vince and I love it~it was even featured in our local newspaper once. You should really try it, it's fairly quick and easy and has ingredients that are typically on hand. I'm sorry we ate it too quickly to get a photo.

My Grandma's Goulash
1 sm. pkg. of spaghetti
1 lb. ground beef
1 small onion, chopped
1/2 of a bell pepper, chopped
1 clove of garlic, minced
1 (14.5 oz.) can diced tomatoes
1 (14.5 oz.) whole kernel corn (or green peas)
1 tsp. chili powder
1 tsp. salt
1/4 tsp. black pepper
1 cup shredded cheddar (more, if you want)
*****
Cook the spaghetti as directed on the package. In a large skillet, brown the ground beef with the onions, peppers and garlic; drain and return the mixture to the skillet. Add in the tomatoes, corn (or peas) and seasonings. You can also add some of the cheese into the mixture, if you'd like, while saving about 1 cup for the topping. Combine the ground beef mixture with the spaghetti, mixing well. (If you think it's not saucy enough you can add a small can of tomato sauce). Pour into a large casserole dish and top with the shredded cheese. Bake at 350F for about 30 minutes, or until cheese is melted and casserole is bubbly around the edges. This is great with garlic bread & a salad! 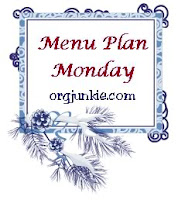 Storybook Woods said…
You know I am a mean mama, I cook for ME. I make what I like (my hubby will eat anything). Now that my girls are in thier teens, I have one who loves food and one still very picky and hates a lot of what I cook. So I am not sure if that worked :-) xoxoxox Clarice
February 1, 2010 at 10:25 AM

Lora @ my blessed life said…
Clarice~
Unfortunately, my hubby is a little picky, too. It drives me crazy! LOL I wouldn't say that I *cater* to the picky-ness in my family, b/c I'm always trying out new things. But I feel like I have to make a few concessions so the kids actually eat something:) I refuse to make mac-n-cheese or pizza every night-ha!
February 1, 2010 at 10:31 AM

Just wanted to say thanks for stopping by Ordinary Inspirations! SO happy to have you.

Also, glad you could relate to the pretty mom post. I made a button for it if you want to come grab it.

Just click the perfume bottle at the top of the blog, and it will take you to the post, with the html code.

If anything, it might be nice to have in your sidebar to refer back to :-) I know it is for me.

Yvonne @ StoneGable said…
Hi Traci, congradulations on your new business! I was once a TS consultant and I loved it! Also your blog is beautiful and your menus look so yummy!I am so happy I found you! I have loved our dinner.
Yvonne
February 1, 2010 at 4:00 PM